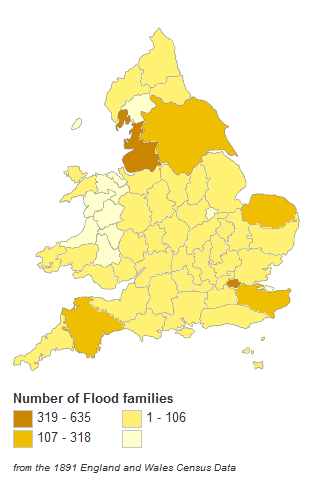 Two years ago I sat on the underground with my friend Martin and studied the tube map for places with the suffix –ham, which means farm (I’ve found activities like this make the journey go quicker!). It was clear from those place names that London’s metropolis actually grew from a large number of farms, and that a lot can be understood about history just from what we call places. I didn’t then realise that I’d come back to blog about this in relation to risk!

Recently I attended a presentation from Somerset County Council on their experience of flooding in Winter 2013/14. The presenter made one comment which really resonated with me

“Muchelney…by the way, any place names which end in ‘ney’ means island…”

It was just a passing comment, but one which I’ve been reflecting on for a little while. Place names reflect local history, so can toponymy tell us anything about risk?

If a place has a history of repeated emergencies (lets say flooding), does that become part of its present and future through being incorporated into its name? To explore this a little I thought I’d investigate the meaning of place names on the Wikipedia UK flood list.

A quick Google later and I found this map via Being The Hunt, which provides the meaning of country names in Europe. At this level it doesn’t say much about risk (with the exception of Land of Revolt), but I wonder whether the same could be done for place names in the UK/London, and what hidden patterns this might reveal? 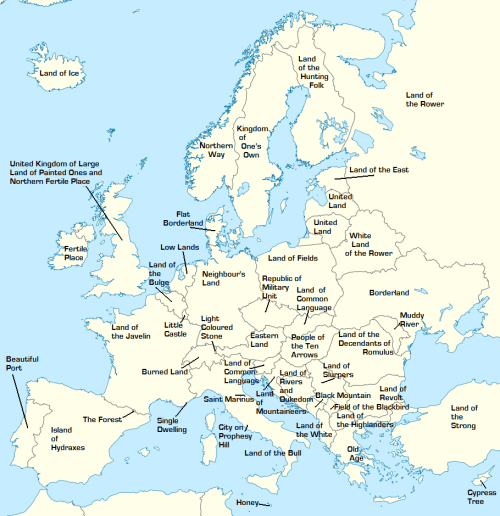 And it’s not just place names. Our own names may give some indication about historical events and could potentially be used to infer future risk…

The map below shows the prevalence of the surname Flood in England in 1891. What strikes me is that the surname is more common in coastal areas or those which anecdotally are prone to flooding. It’s impossible to infer much from this, but would be interesting to do a longitudinal study to see how these surname clusters have moved over time, and it’s an interesting pattern nevertheless!

I’m not sure, other than being interesting, what a detailed exploration of this would reveal. However, I’ve recently been doing some work on risk perception, and wonder whether people who live in places which have flood-related names have a higher degree of risk awareness?

Your thoughts and comments would be welcomed. This is very much just a collection of half-formed ideas rolling around in my head, and if anyone could help me make sense of them that’d be great!

Londonist have just released another alternative Tube map – I wonder if their next one could be ‘meanings’ of current places? Don’t worry, my knowledge of Shakespeare runs to just two quotes (both from Romeo and Juliet). David Alexander posted recently about the origins of the word ‘Resilience’, however, today I caught a blog post from Durham IHRR and it got me to thinking…does it matter what we call what we do?

In the office we often have conversations about what ‘Resilience’ means. I think we’ve finalled settled on a definition, based on the UK Civil Protection Lexicon, which includes the ability to detect, prevent, handle and recover from disruptive challenges. Whether this is my preferred definition or not isn’t so important (I’d actually have prefered something more reflective of the Latin eymological root of the word resilire “to rebound, recoil”).

I found the Google Ngram graph for ‘resilience’ interesting, although the scale of the graph probably runs the risk of us reading too much into the patterns. The period of growth since the 1960’s is particularly interesting and probably reflects the term being used by a wider range of fields (ecology, psychology, climate science etc).

Time Magaine called it the buzzword of 2013, so I took to Google Trends to see if there were any more recent pattens. Whilst there is a definate upward trend, to me it’s still inconclusive.

But the actual issue here, is does it matter? Call it resilience, call it Emergency Planning, call it Disaster Management, and the rose still smells the same, even if it doesn’t smell sweet.

I’ve always found definitions restrictive. Perhaps embracing the malleability and imprecision of the definitions could be a good thing? After all, in the event of an emergency/disaster/crisis/catastrophe/act of god, do we, as individuals or communities really care about definitions?