Sky pulled a bit of a fast one here, combining episodes 5 and 6 into a double bill. Although this was not the plan, I’ll also blog about them in a double bill. One of the key attributes of an emergency manager, you see, is the ability to roll with the punches!

How Sky pitched these episodes:

The episode starts with a briefing in COBRA, always a handy narrative device to bring people up to speed if they’ve forgotten where we left off. In real life, the Cabinet Office support COBR meetings through the production of a commonly recognised information picture, which is widely referred to as “The CRIP”.  This process saves going around the table to get an update from each person as it’s already been collated.

The long and short of it is that the public is becoming increasingly frustrated with the lack of progress being seen to restore power to Northumberland, resulting in blockades around London to force the hand of the Government.

One theme that has come through strongly for the entire series is the ‘us v them’ between the ordinary members of the public and the privileged government. There doesn’t seem to have been any strength of feeling towards anyone other than the politicians, which I think would have been more realistic. “How has this been allowed to happen?” is a common question following an emergency. However, rarely is the answer simple and it’s usual that there are multiple intersecting criteria. Politics may be one of those but it’s not directly the sole cause.

Remember that sub-plot about the drug-pushing daughter of the Prime Minister? Well, things appear to have gone badly for all concerned, but…what I did find interesting is that the Press Office keeps a diary which is being used to establish the facts. In many ways, that’s not too different from keeping a record of decisions during an emergency. In the UK this record is referred to as a log. This is then used as a verb, logging, to describe the process of capturing information in a chronological record.

Oh gosh. The leader of the protest group has been hit by a car in a scene much like this…

With a sniff of conspiracy theory about the hit and run, negotiations with the lorry drivers supporting the blockades have broken down and reports of looting (which I’ve mentioned before is mostly a disaster myth) and rioting ( a term which they Government were very careful to avoid using in 2011, anecdotally because this would have given rise to different compensation arrangements under the Riot Damages Act of 1886!).

Sidenote: It’s always exciting watching TV shows set in London and trying to spot locations. The secret meeting place for the Russians is Marsham Court on Marsham Street. I walk past it regularly but will be more on the lookout now!

The decision has been made to break the blockade using force, and the PM has authorised the military use of firearms against civilians.

Ah yes, and they’ve shot a journalist. Not good optics to be honest. That’s probably not going to look great on his Wikipedia page.

Ok, who cares, let’s move straight on to the final episode and get this thing done.

The first 20 minutes is all politics and backstabbing and double-crossing and nepotism. Once you’re past that it’s straight into the delivery of a massive electrical transformer to Northumberland.

They’ve run into a slight issue, that it’s heavier than the bridge they need to cross will allow. The driver of the truck has refused, but helpfully there’s someone on hand from the Cabinet Office to step in as a hero. Cue tense background music, fast cuts to cracks appearing in the road, tight shots of anxious faces.

Panic over, he’s made it across! The only thing left to do now is to connect the transformer into the system, something which sounds simple, so that probably means it’s incredibly specialist.

More politics. Honestly, the tone of this series has been so inconsistent. Is it an emergency management procedural? Is it the West Wing or House of Cards? Is it an apocalyptic drama? It seems to depend from story arc to story arc.

Well what do you know, they got the lights back on, patted each other on the back and went on their merry ways.

A disappointing end to the series.

Power has been restored. All’s well that ends well. The reality though, is that ‘recovery’ would take many months, likely years.

Increasingly I’m of the opinion that recovery doesn’t really exist. Actually, maybe it shouldn’t exist. Lessons should always be learned, processes improved, arrangements reviewed. The obsession with recovery devalues the process of learning, but that feels like a post for another time.

I have a few concluding thoughts on COBRA:

And finally, just in case you were in any doubt about the Civil Contingencies Act, the characters themselves highlighted… 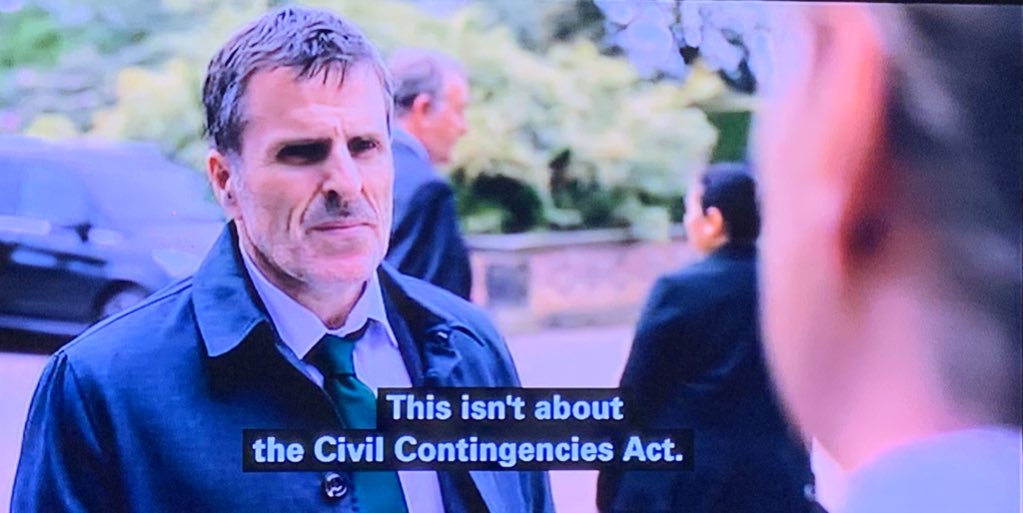