In 2007 I did some work on Hospital Evacuation, which is a throughly complex problem. I won’t go into the detail here, suffice to say that it brings some real ethical issues and logistical challenges. I mention this, because way back in 2007 someone that I spoke to described their Hospital Evacuation Plan as “planned improvisation”. 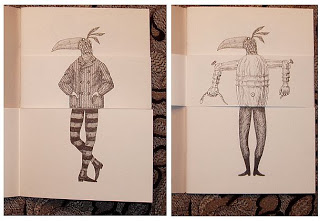 I remember recoiling at this. Here I was trying to document every last detail of how wards should work together with central hospital functions to expedite a swift evacuation, yet over here was someone essentially saying “we make it up on the day”.

Today I was having an unrelated conversation with a colleague about Command and Control (for non experts, that’s the systems and structures by which an emergency is managed). We were talking about the need to planned arrangements to have sufficient felxibility as to be applicable to a variety of circumstances. Without the ability to accurately predict the future this felxibility is vitally important.

However, you also need to balance that flexibility, with having coherence and structure, to try to bring the emergency under control as quickly as possible. I was reminded of one of those mix’n’match childrens books.

I wonder if there might be something in this approach for emergency management? Could you have a variety of planned components which all fit togther ininfinite complementary combinations?

I’m a big fan of recognising the emergent behaviour of systems and communities when under stress, but do I bring that do the formal responder organisatiopns I work with? Probably not as much as I could. There is definately a degree of creativity involved in sucessful emergency response – how can we create an environment which nurtures this without abandoning the important act of planning?

I’m going to give this some more thought over the weekend and come back with some more well rounded thoughts and suggestions – until then, I’m off to read an article about Collaborative Adhocracies….fun!