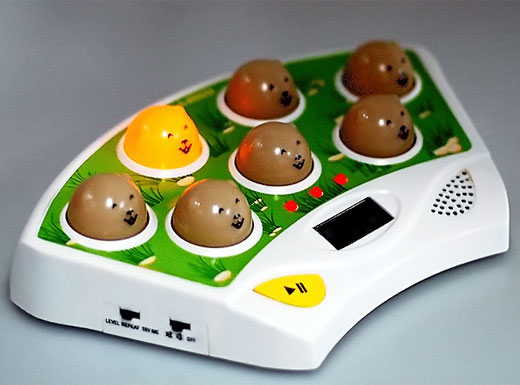 I don’t condone mole-whacking and here’s why…

Blog posts have been a little sparse recently. Since the St Jude storm in October 2013 the weather in the UK has been ‘freaky’ (this was a comment made by a colleague at the Met Office, there’s no arguing with insight like that!). Storms, gales, unprecedented rainfall, flooding…you name it, it’s battered our green and pleasant land!

London has largely escaped the worst of the weather. There have been some issues relating to groundwater flooding in susceptible areas, but nothing on the scale of what has been seen in Somerset or Surrey. (Incidentally. whilst this is terrible for those people affected, I do encourage people to occasionally pause, look at international incidents, and try to maintain a degree of perspective). However, an absence of significant impact hasn’t meant that a lot of work and long hours haven’t been necessary.

Since early February people have been beavering away (yes, another mammalian metaphor!) both on the ground and in offices to try and mitigate the impacts that flooding is having, or could potentially have in London.

Risk management is a funny old thing, and not dissimilar to that whack a mole game.

Take flood defences, massive investment like the construction of the Thames Barrier brings flood risk ‘under control’. This, combined with continually changing political drives, means that resource and attention is then focused elsewhere; counter terrorism perhaps, or protection against space weather. However, a combination of changing science, political oscillation and adjustment to resourcing mean that at some point the ‘control’ offered by the intervention diminishes and the risk returns. And whilst the risk returns to the same level, the vulnerability to it has increased, often because there has been development in that area.

The mole has popped up again, this time bigger and angrier. While our natural reaction, and that observed in the current flooding is to whack the mole (“we need to prevent this from happening again“) inevitably that will mean that attention is taken away from managing some other risk, providing an oportunity for a different mole to emerge.

Whilst I’m not surprised about the forward-leaning nature of politicians and senior leadership that has been seen recently in the UK (this seems to be an international trend) I think it’s important to stand far enough away from each mole individually to see when the next one is about to pop up.

Also, moles are undeniably cute, and don’t deserve to be whacked!

UPDATE: it looks like I’m not the only one to have observed this whack a mole effect. CNN reported a similar situation when talking specifically about the Fukushima response late last year