Two years ago I undertook to live on £1 per day for a week as part of Live Below The Line. It was a week that saw culinary creations such as egg fried rice with sausages and vegetable toad in the hole and where I discovered that mushy peas can be served with literally any meal!

It tested my inventiveness, but not quite as much as today’s 30 Days task. Joining forces with the Emergency Kit Cook Off campaign (which is brilliant!) players are challenged to rustle up something from the following ingredients:

Live Below The Line was difficult, but as I could choose my ingredients for the week it was easier than having that choice taken away from me! I managed to use all of the listed ingredients, but I’m not sure my recipes will be featuring in any restaurants any time soon! 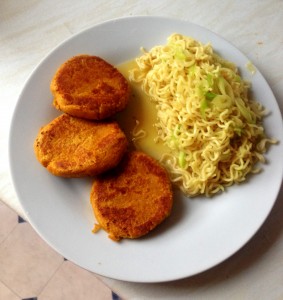 I made it up as I was going, but I’d estimate that my recipe was as follows

I mashed all the ingredients together (in hindsight I mashed it a little too much and would recommend some of the chickpea texture is preserved) and formed into patties. I coated in seasoned flour and fried in a little oil for several minutes. I served this with chicken instant noodles made to the packet instructions, but I also threw in some chopped spring onions (or scallions!) as I had some lying around.

To follow my dinner, I used the almond milk and dark chocolate (and some poetic license) to create a smoothie. Given the choice I’d probably have them separately but that didn’t seem to be in the spirit of the challenge, but making the smoothie would be tricky if restricted to manual equipment only!

It was difficult to get the chocolate chopped fine enough, which resulted in a somewhat lumpy smoothie, but it didn’t taste too bad!

So, there we have it, my creations for today’s task. I don’t think I;d rush to make either again, but I know that if that was all I had in the cupboard I wouldn’t starve!