How Sky pitched this episode: Sutherland and the Team work around the clock as the blackout throws the nation into crisis.

TL;DR recap of Episode 1: a geomagnetic storm threatens to wipe out technology (there’s a great episode of BBC’s In Our Time looking at the science of space weather). The last episode ended with the power starting to go off in London…

Is everybody ready for episode 2? Let’s do this!

POP QUIZ – What is wrong with this opening scene? 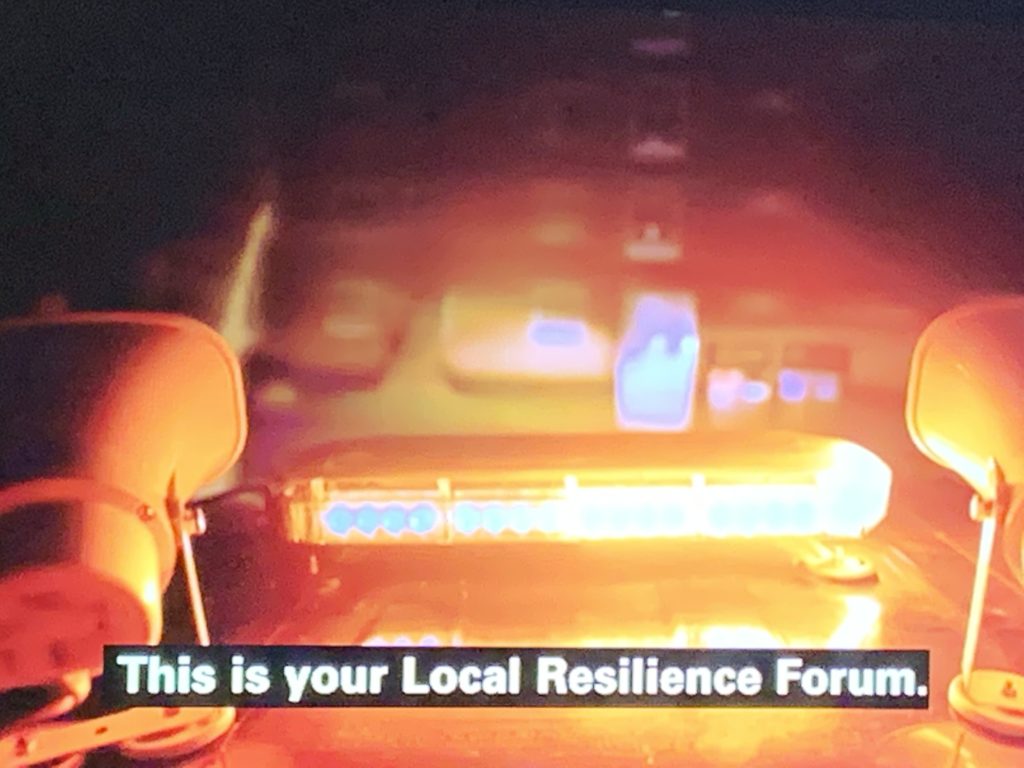 No! A Local Resilience Forum does not respond to emergencies. It’s simple.

Do you remember the acronym I mentioned in the first blog, METHANE? It’s a memory device to help emergency services give clear structured information about a dynamic situation back to their control rooms. That enables them to mobilise additional resources and responses.

Here’s a quick video on how it’s supposed to work:

As you can see, it’s not really designed for assessing national-scale incidents, but just for fun, let’s see how it works for the information we’re bombarded at the start of this episode and what we know so far…

What d’ya know, that actually worked out better than I was expecting it to! Right, so we’re all now have a common operating picture, let’s proceed.

The COBR team seem to have access to some specific data showing the affected areas. At 3 hours into the crisis, I’d say that’s probably optimistic. Information typically starts off quite general and gets refined as details emerge.

Oh dear. 4 badly hit areas. 3 spare transformers. Resource problems. Yes, that’s fairly typical. Tough decisions have to be made with limited information to determine the best use of assets. (You could think of this as identifying the ‘least worst’ option – clunky language, but essentially the idea that in some cases there are negative outcomes whatever the option. Also known as wicked problems).

Sidenote: Did you catch the mention of Puerto Rico? I suspect that’s a reference to the much-delayed support from the United States following Hurricane Maria.

Our nice Police friend is concerned about the ability of the hospital to keep running to care for the injured place passengers. Fortunately, the nice people in the Cabinet Office Briefing Room have arranged for a helicopter to bring them some blood and medical supplies.

In reality, if there was a problem, the line of communication would be between the NHS and Department for Health and Social Care. If appropriate (and after they had figured out their policy position and own media lines) they would relay that to COBR.

Overlooking that for a moment, we’re going to take a deeper look at the blood issue 💉 (although nobody has actually mentioned there are shortages).

The hospital is required to maintain it’s own stocks of blood (and blood products) and their own contingency plan. It’s likely there would be mutual aid (i.e. sharing) arrangements with other local hospitals and they would have support from NHS Blood and Transplant. It’s therefore unlikely that this would be the first issue that they would need national support with.

Is an Emergency Department waiting area is the best place for the police to be on the phone to COBR? I think not! Also, given the reported issues with mobile masts, how are these telephones working?

Anyway, let’s not get distracted; we shall press on…

“Tired People make bad decisions” Yes. This. Getting people to rest, or sometimes even to take time to eat, during a response can be a significant challenge.

The Chief Constable has turned up at an immigration removal centre where staffing resources are 30% down.

Is it weird that a plane crash and an immigration centre were the subjects of a recent episode of Silent Witness?

Like METHANE, Step123+ is a device used by the Ambulance service to consider their response to potentially hazardous substance incidents. It basically says

I find myself using Step123+ in everyday life. Like…when two TV shows show both use a plane crash and immigration centre as a plot point….my mind instantly thinks, “is that the beginnings of a pattern?”

Anyway, back to the main event…

Back to Whitehall and the COBR folks are discussing where to send 3 generators. There was a (well researched) conversation about getting supplies from Germany and recognition that as other countries are having similar issues international supply may be limited.

How would you decide who should get the generators?

The Chief of Staff has gone into a hotel. Everyone is using a real candle. There’s not a single torch. Won’t somebody think of the fire risk?! The Concierge mentions that electronic door systems are not working. Now, unless this is a super fancy hotel using the latest systems, most hotel door locks are battery operated so this is unlikely to be an issue*.

I hope all the kids have got enough juice left in their phones to take insta-worthy pictures of the Aurora!

Sky News has clearly got a generator, they’re still broadcasting. But with national blackouts and likely loss of transmission, it’s not clear how many people would be watching. 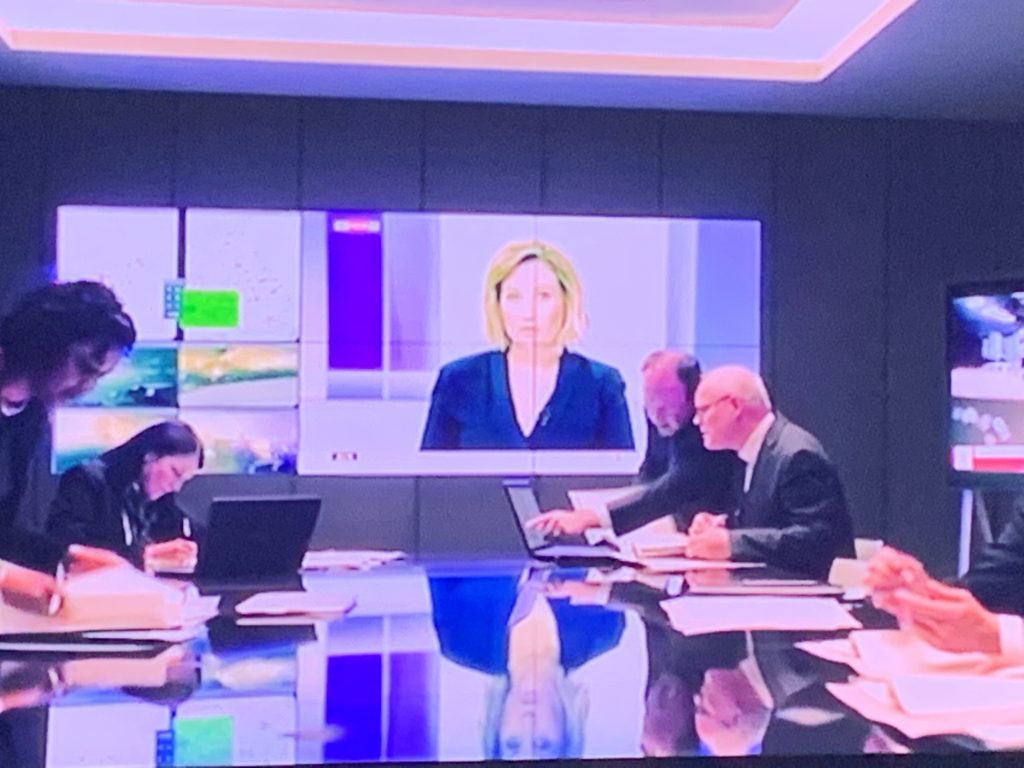 Sidenote: The writers have done a phenomenal job of writing the Home Secretary to be the most awful person in politics. I suppose they have lots of source material. 🙊

Meanwhile, over at Royal Northumberland Hospital…we’ve got a crowd control issue (as people try to charge their phones using the hospitals emergency generator power) and escalating trouble at the removal centre. A colleague on twitter pointed out this actually happened in Lancaster in 2015.

It happened in Lancaster

You know that fire risk I mentioned earlier…well the hotel is now on fire. Without a functioning alarm system, it seems to be down to the Chief of Staff and her one night stand to alert the occupants.

I’d estimate that the fire puts around 80+ people in need of temporary accommodation. In the first instance, this would be the hotel’s responsibility, but I imagine their processes for finding available rooms is compromised, so the responsibility for emergency accommodation would fall to the local authority, compounding the issues the council will already be dealing with.

My concern has shifted to the personal safety of the Police Chief checking on the escape from the deportation centre in his uniform. I’d imagine high levels of anger and fear from the people at the centre towards the Police (although I think it’s actually UKBA responsible for the centres?). In any case, my advice to him would be to remove/cover his uniform.

Yes, as suspected, the escaping people weren’t happy. Thankfully (as he’s the only policeman outside of London) he managed to get away to continue doing other people’s jobs.

It continues to go from bad to worse in Northumbria, as high-security escapees have attacked students at the university. Quite what the motive for that would be is a bit unclear, but we’ll have to wait until episode 3 to find out!

* it turns out my initial view here might not be right, one to research further!

Post Script: Emergency Planners unite! It’s not just us that feel the COBR/COBRA debate. I present some evidence:

At the 7 minute mark theres a spelling error it says

What does the A stand for?

You will have many, many questions

Example: I do not know why Scotland is policed entirely by a Chief Constable with an ageing BMW and a crowbar

Pedantic point – The committee is called COBR, not Cobra https://t.co/LrR8dU1ekI

Cabinet Office, Briefing Room A is the official location from which the acronym derived

Come on @SkyOne stop dumbing down it’s #COBR not #COBRA