This week I’m honoured to be a participant on the European Union Civil Protection Mecanism Introduction course. This is a pan-Europe course being held near Split in Croatia, and I’m one of 24 experienced delegates from a wide range of different European countries.

The course is fairly intense, with working days from 08:00 to 18:30 nearly every day, so I’m not going to get as much time to blog as I anticipated. Instead I’m going to capture my questions and reflections each day and then summarise the course as a whole when I’m back in the UK.

It was in at the deep end today starting with a self assessment, and then three lectures on various aspects. My questions from today:

A thoroughly interesting day, and I’m excited about learning more from colleagues who have worked on overseas deployments far and wide, and hopefully getting some way towards answering the questions I’ve posed myself above!

Zbogom for now (bye in Croatian!)

I’ve got a little longer to blog today so thought I’d explain a bit more about the course.

The EU Civil Protection Mechanism came into being in 2001 and is an agreement and set of supporting arrangements to enable pan-Europe coordination for Civil Protection. This includes things such as providing equipment and resources if an emergency goes beyond that which a country has capacity to deal with, but also includes information exchange and a programme of training and exercising to share ways of working with European partners.

The Community Mechanism Introduction is the first of 12 courses which train participants in the skills to manage, lead and support these arrangements, which can be deployed either within or outside of the EU.

Today’s lectures further explored the current and future challenges for disaster response, legal aspects of responding to disaster (which was fascinating and confusing in equal measure), and then group work using the tools of the Civil Protection Mechanism to ‘solve’ disaster scenarios and consider information management.

Again, some questions came up for me to investigate when I get home, and that will perhaps be of interest to other colleagues following my adventures:

Tomorrow we’ll be investigating civil protection and crisis response structures in all of the 28 EU member countries, I’m looking forward to that as from conversations with the other colleagues there are some notable differences.

Today was hump day for the Community Mechanism Introduction course today. This meant two things, firstly that the instructors are turning up the heat but secondly, that we’re beginning to function better as a team generally and specifically within our groups.

Joining me in Team C (which we decided stood for Champion!) are

Today our main focus was gaining an understanding of the national civil protection arrangements across the EU, and whilst there were many similarities to the UK, there were some interesting differences entering around structures and financing models (the picture below if me feeding back the discussion within our team!). We also spoke today about the operational management of EU resources in the field and participated in a number of exercises to put those skills into practice. 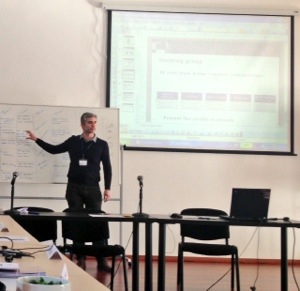 Less questions came up for me today, but here were my key observations of the day.

There we have it, some operational detailed questions, and some more fundamental ones to reflect on…expect a few more tomorrow!

The penultimate day of the course means that today mostly centred around putting into practice some of the issues we’ve spent the week studying. The scenario for our day long exercise was that our team was the first EU Civil Protection resources to arrive in Ukraine after some intense flooding. Our challenge – to liaise with the Ukraine government and the EU Commission; and coordinate the arrival and deployment of specialist European resources.

I’ve participated in a LOT of tabletop exercises, but what surprised me most about this one was that it was so well organised. Essentially the instructors were running the same exercise simultaneously four times! It was really good to get see the operational side of the response, the combination of fast-pace and long gaps in activity reminded me very much of my role during the Olympics in the London Operations Centre!

No questions today, as the formal dinner of the course is in around 20 minutes, but after the recap tomorrow I’m sure there will be a few straggling questions which I’ll share, as well as my overall thoughts on the course!