I have a long-standing theory that the best Japanese restaurants specialise in a particular dish. I would always recommend exclusive sushi places, dedicated ramen joints, or restaurants that only sell okonomiyaki.

However, that theory has been blown clean out the water with a trip to Mikawa Japan, which offers a range of sushi, sashimi and ramen.

My visit ahead of a gig at the O2 Shepherd’s Bush Empire was a bit of a last minute decision (thanks in part to the Victoria Line doing everything in its power to mess up my journey). The original plan has been to go for ramen at Shoryu at Ichiba Japan Centre in Westfield, but I thought that might be cutting things too fine for the start of the concert.

So Google Maps suggested Mikawa instead. Initially I was sceptical – the website is pretty sketchy and it was tricky to find details of the menu other than some photos which looked like they’d been taken on a potato.

Mikawa is one of those traditional Japanese restaurants – think sumo wrestler wood cut illustrations on the walls and red lanterns. However, they brought a Western vibe (and a great pre gig warmup) with a 90’s pop playlist!

I visited with my sushi obsessed friend, so we picked the Mikawa Set (an 8 piece salmon sushi roll, 6 pieces of nigiri all of different types and 3 types of sashimi and then we both opted for the Tonkotsu ramen. You know you’re in for a good experience if there is chūhai (essentially it’s a Japnanese alcopop) on the menu too, we chose yuzu and white peach flavours.

The sushi/sashimi arrived first and was marvellous. 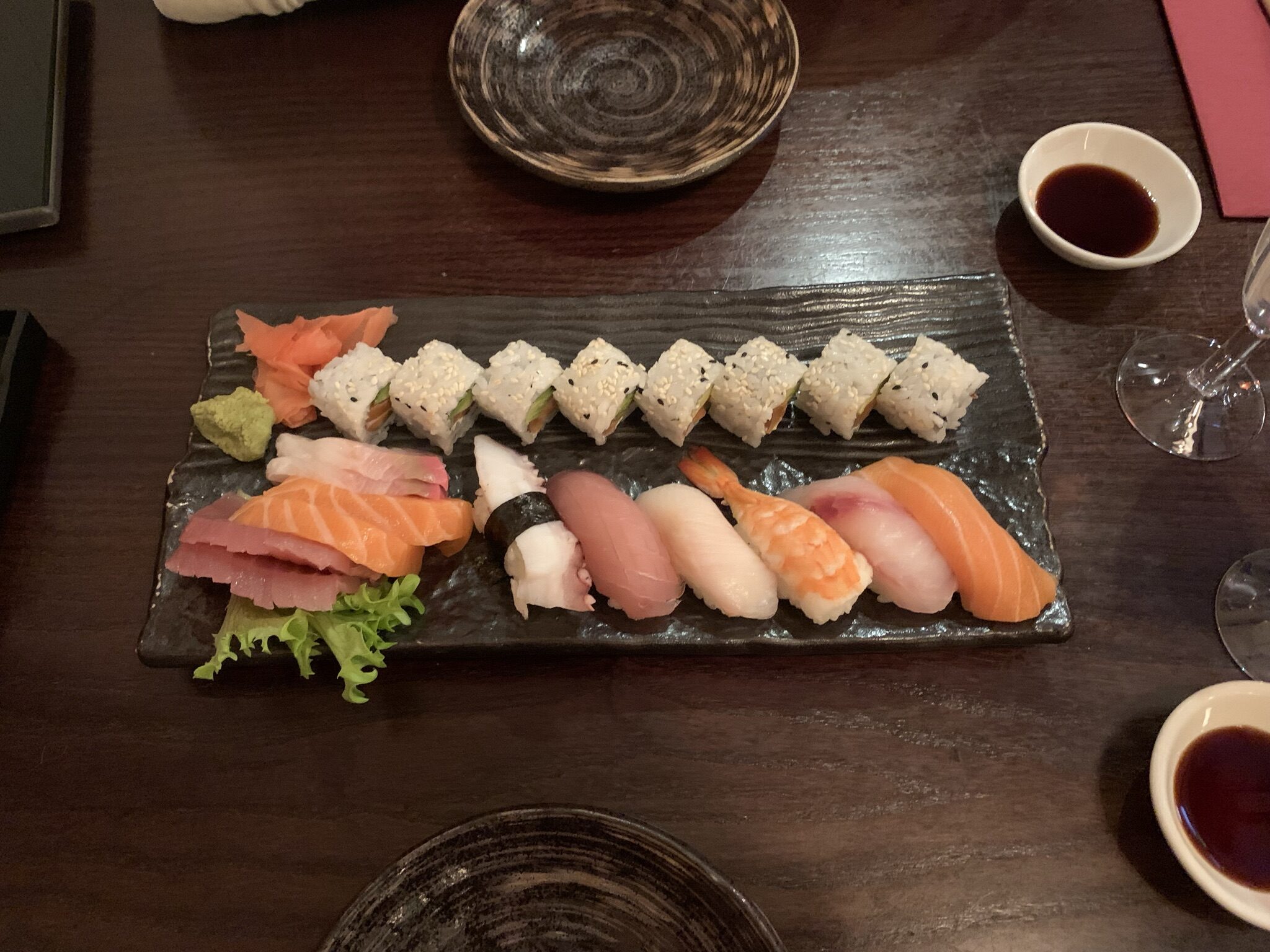 My personal highlight was the tuna sashimi was so fresh, slightly salty and almost meaty rather than fishy. Nick loved the salmon sashimi, which I agree was also really good. The other stand out item was the wasabi, which was less lurid green than you find in some places, and has a texture similar to crunchy peanut butter. The only downside was that I wanted more, but we also had a bowl of ramen to come.

The noodles arrived as a ‘main course’ which is better than some places that just bring it as and when. We both noted how nice the bowls were too. 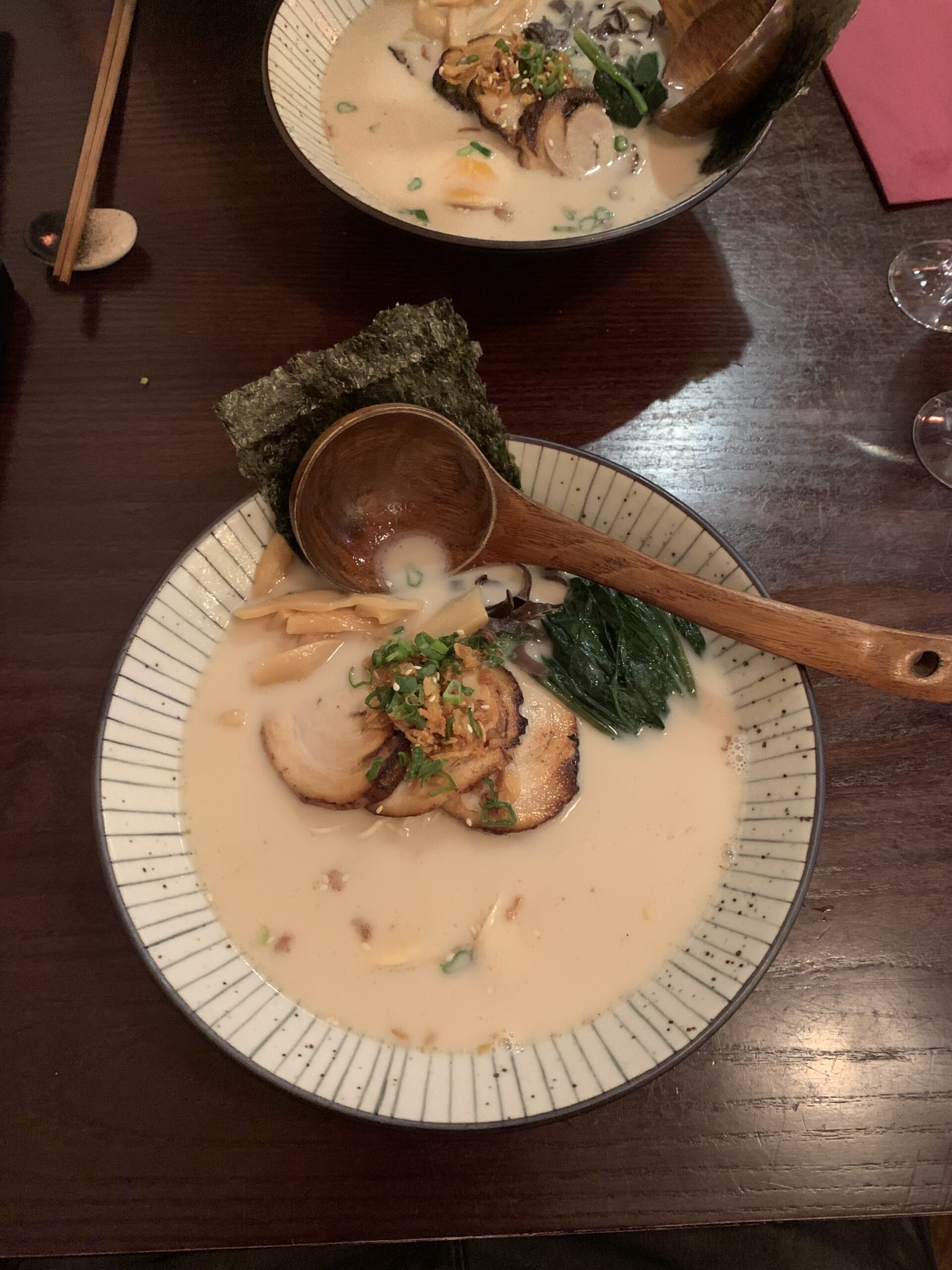 The noodles themselves were overdone (in that they were soft when they first arrived and then they continue to soften as you eat too). Nick wasn’t sure about the addition of ‘spinach’ as a topping, but I have to disagree; I thought it added a different more earthy dimension. The broth was delicious. It could have been more unxious (spelling?) but it was smooth and rich with a subtle sweetness. Two half eggs were also slightly overdone, but had so much flavour. And the pork slices were beyond great!

I would go back to Mikawa in a heartbeat.

It’s great to find new places, especially in areas of town that I’m less familiar with, because it’s an incentive to return and do more exploring. I’d make sure I go hungry beforehand though, so I could get even more sushi!