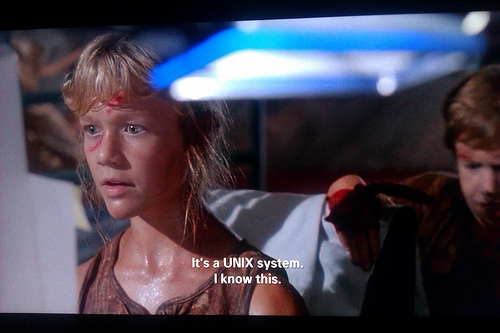 The tl;dr version of this post: don’t forget about the insider threat!

This week I attended the first in a series of three events by the Institution of Civil Engineers entitled Preparing London. This particular event was designed to consider the human threats to infrastructure.

During a talk from Nathan Jones (see this blog on his talk) my mind wandered and wondered…Did Jurassic Park teach me everything I know about cyber risk?

God damn it! I hate this hacker crap!

Ok, so maybe not everything worth knowing about cyber risk is summarised in Jurassic Park, but it’s a useful introduction into what happens when the tables are turned and technology which usually helps keep us safe, becomes the risk.

Everything in Jurassic Park is connected. The electric fences, the lighting in the visitor centre, the locks on the doors. When it’s working as planned, this connectivity helps the park’s management maintain an efficient operation and a positive guest experience.

However, such a complex system requires some centralised control.  Looking at this through a business continuity lens, this is a clear single point of failure. An inherent risk.

This has clear parallels with our modern society and the interdependencies between systems that I’ve talked about previously.

Dennis Nedry exploits his colleagues limited understanding to enact his attack. He uses his tech-savvy advantage to provide cover for him stealing intellectual property, whilst putting lots of people in danger. The ultimate lesson here is that the real monsters aren’t the dinosaurs.

Objects in mirror are closer than they appear.

As well as a light-hearted moment during the dinosaur chase sequence, I think Spielberg also snuck this in as a metaphor for risks manifesting in ways which had not been considered.

Were the Jurassic Park team aware of cyber risk? Yes, there is literally a scene about passwords. I expect a lot of  people assume that a good password is all they need for their IT security.

It’s clear they had also considered other risks, and had taken proactive action to control that risk. Electric fences, professional hunters, CCTV and motion sensors and the attempt at all-female genetic engineering are just some of the risk controls in the film.

But had the team considered the possibility that an employee would want to hold the park to ransom for personal gain? Could they have identified the vulnerability of the computerised control? Could they have done more in advance to protect the systems from malicious attack?

Dennis, our lives are in your hands.

Early in the film there are hints at Nedry’s personal financial difficulties. Later he mumbles to himself about test runs of his embryo heist.

John Hammond, the park owner recognises the power that Nedry has.

There were clearly signals which the team missed and knowledge which is combined, could have allowed an intervention before he got the opportunity to shut down the park.

Clever girl / I know this.

Just as the team hadn’t anticipated an insider threat, Nedry wasn’t expecting a tech-savvy teenager to thwart his plan.

Just when it looks like the raptors will get into the control room, Lex (the park owner’s granddaughter) recognises the Unix system and takes maters into her own hands. 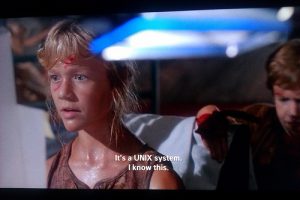 The actual interface may be debatable (in researching (yes, research!) this post I’ve found that it was technically available, but I’m doubtful that a school student would have been aware), but it comes as no surprise that kids have a natural affinity with the technology that adults have to think about.

Side note: Provided the right precautions are in place to prevent unauthorised use, user friendly systems aren’t just a productivity win; they help prevent people finding work-arounds or backdoors.

With the ever increasing access to, and pervasiveness of the Internet and smart devices, Jurassic Park remains relevant today.

I’d argue that we’ve already reached a point where complete understanding of system interdependencies is impossible. Our societies and the technologies used are just too complex. However, we can continue to challenge our assumptions, keep our risk assessments grounded in reality and take action in advance to mitigate that risk.

It’s also a reminder that physical and IT security are just parts of the puzzle when it comes to risk management. Solutions are also required, sadly, to prevent against malicious attack by either insiders or outsiders.