Every now and then a book comes along that is so spot on, you can’t believe it hadn’t already been written.

That’s the case with Gill Kernick‘s book Catastrophe and Systemic Change: Learning from the Grenfell Tower Fire and Other Disasters. 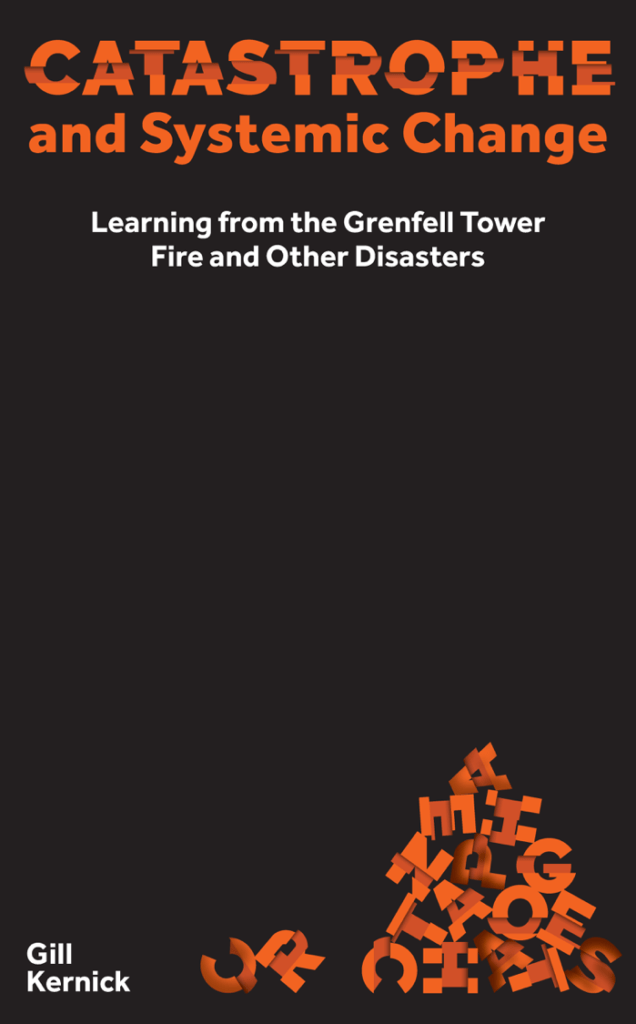 Gill lived on the 21st floor of Grenfell Tower between 2011 and 2014. We all have our own recollections of the morning of 14 June 2017. Like many of us, Gill watched the Tower burn. Unlike many of us, her former neighbours were amongst the 72 people who tragically died. Her book is dedicated to them.

In part, the book is an exploration of the systemic issues behind why we don’t learn from disasters. Kernick has worked in high hazard industries and brings examples from there as well as from other disasters to show repeated failures to bring about post-disaster change. But her book is also intensely personal, and in parts reads like a diary, like she is making sense of her own emotions and thoughts, and processing all of this during a pandemic when other learning is also falling by the wayside.  I didn’t expect the book to make me emotional, but it did.

Before discussing what I found particularly resonant about the book, a little disclaimer. I’ve been involved in the response to Grenfell since the early hours of that night in 2017. I’m still involved now. The Grenfell Tower Public Inquiry is continuing. For those reasons, I won’t be commenting on chapters 1 and 2 which consider the specifics of Grenfell, but will focus on the themes of learning and systemic change.

The book catalogues failed opportunities to learn. There is a whole swathe of documents, reports, investigations, inquiries and research that show that despite assurances rarely do ‘lessons identified’ translate to ‘lessons learned’ at either the scale or pace required. And this continues, on 24 June 2021 at the Manchester Arena Inquiry, there was considerable discussion about the collective failure to learn lessons from an emergency exercise.

Right there on page 6 my frustration is in black and white “the system is designed to ensure we do not learn”.

My biggest personal professional frustration is the repeat lessons. To ‘learn’ something, again and again, is to demonstrate that it is not actually being learned or addressed sufficiently. I’ve worked in organisations where the focus is on putting in place systems and processes to ‘help’, but which all too often just result in shuffling bits of paper around.

We live in a complex, messy, often unpredictable world. I think it gives us a sense of comfort to think that we are ‘in control’ and can forecast what will happen in a given situation, but the reality is that emergent behaviours and complex dynamics between systems mean that we are only just scratching the surface.

I’ve blogged previously about work to understand emergent behaviour (‘sit in the messiness’ and ‘pop up emergency planning’), interdependencies between systems as well as my desire to see more empathetic approaches towards emergency management. It’s heartening to see that somebody outside the emergency management field also sees the same issues. It gives me a new resolve to try to address them.

To operate effectively in an increasingly complex world, Kernick suggests that governments need to change how they approach public engagement. I’d go further; this is not limited to engagement, governments need to embrace flatter, more organic structures for emergency response and move beyond ‘command and control’.

Emergencies and disasters often have high levels of uncertainty. This calls for what Kernick refers to as ‘the democratisation of expertise’. None of us individually have all the answers; we need to work together to make sense of a situation and determine a course of action. It’s an unspoken principle that runs through emergency management. That’s why we have COBR, once described to me as “Whitehall in miniature”, which brings together a bunch of people to find a collective answer. The same applies to Local Resilience Forums and Strategic Coordinating Groups. They are structures that allow knowledge and expertise to be pooled.

And those structures need to be more representative of the communities they serve. We need people with different lived experiences to shape a response that will be better for everyone.

Kernick moves then to consider the role of accountability and scrutiny in Government. The conclusion generally seems to be that structures for scrutiny are okay, but the willingness or ability of governments to act on that scrutiny is low. There is no structure that can compel public inquiry recommendations to be addressed. Similarly, the Prevention of Future Deaths reports and rail industry incident reports and many others too. They all swirl around, unaddressed, in a soup of known issues ready to boil over the next time there is an incident.

So, why don’t we learn? It’s a question I come back to a lot and which this book has helped me to explore. Through the book Kernick goes on a journey about learning, expressing what initially seems to be curiosity, but then becomes increasingly frustrated and ultimately becoming incredulous. I’m not quite at that stage just yet, but I do think that there is a requirement to turn the mirror on ourselves and really examine the conditions and beliefs which we hold on to, which might be stopping us from making more progress.

And so, we come back to where we started, that systemic change requires “a tribe of disrupters” and I hope this book galvanises emergency managers across the land to be braver and to disrupt with kindness.