One of the (many) shows I’ve watched on Netflix over the last year is Million Pound Menu. Hopeful restauranteurs set out to impress judges to secure funding for a new eatery.

The pandemic is far from over, but we have reached the stage that the Government is once again permitting people to eat indoors at restaurants. So the plan was to track down one of the successful contestants and support small businesses.

Trap Kitchen in Balham was top of the list. But after looking at the prices and portion sizes it felt a little extravagant for a Tuesday.

So instead, we returned to old faithful Nanban in Brixton. Not a Netflix winner, but the founder did win Masterchef some years ago. I’ve blogged about previous Nanban visits here and here.

This is was my first time eating in a restaurant since October 2020. Things are different in many ways, socially distanced tables, eMenus and app ordering, staff in PPE. But things are also the same too, relaxed atmosphere, delightful smells wafting from the kitchen, and clever marketing which appeals to your senses and gets you to order more than is really needed!

We ordered the Angry Birds wings and padron peppers, a Lazy Goat ramen and a The Leopard ramen. 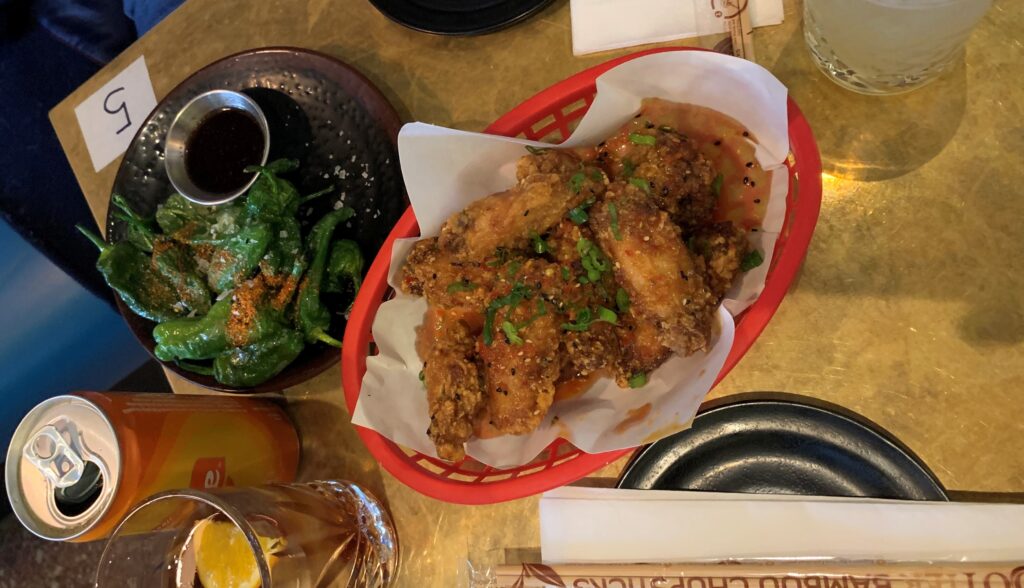 That was all washed down with some unusual sounding drinks – a Kinnie (think a fizzy non-alcoholic negroni) and a Cloudwater soda (apparently pineapple and yuzu flavour, but you had to search hard for any kind of flavour to be honest).

Nanban is one of my favourite ramen spots in London. What they offer is Caribbean/Japanese fusion, so this isn’t somewhere for an authentic experience but is good for trying out new things.

First up was half a pound of angry birds chicken wings. I wasn’t really sure how many that was but it sounded like a lot. In reality, eight. The outside of the wings was crispy and drenched in a sweet yet spicy (like, lips on fire, fire emoji) sauce.

Two bowls of ramen then got delivered to our table. Nick had the Lazy Goat ‘fusion’ although his review was “I enjoyed it but didn’t get a Japanese vibe”. The meat was very tender but it was a bit lacking on the broth front. The scotch bonnet bamboo shoots were also a teeny bit too spicy for us. 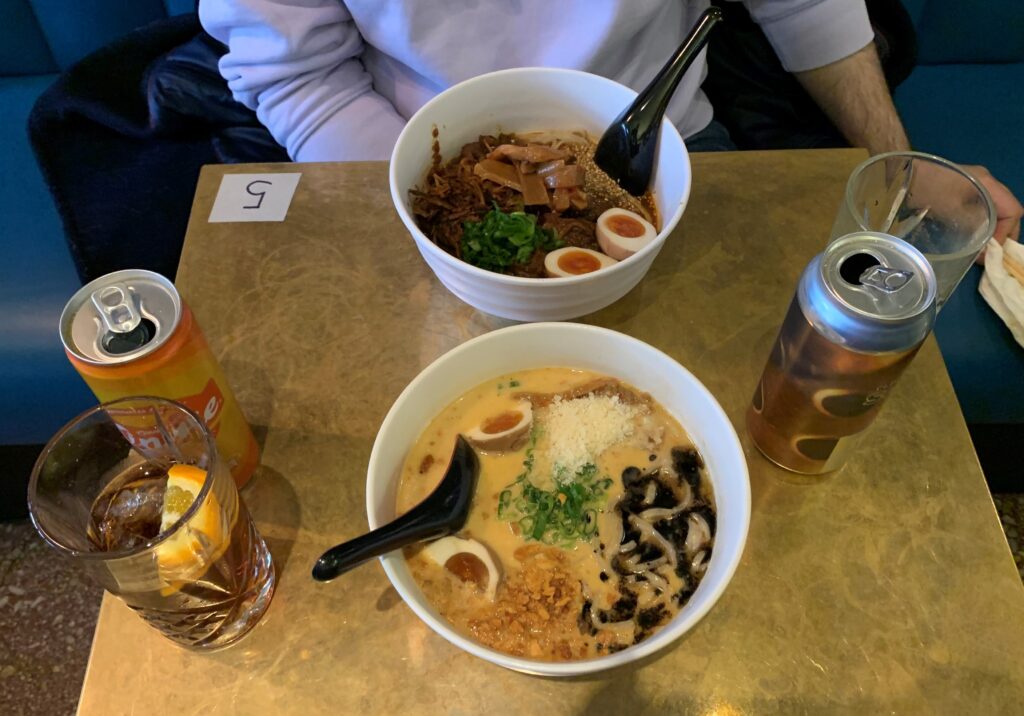 It was only when I stirred my bowl that I understood it’s name ‘The Leopard’. Burnt garlic oil spotted through the creamy broth like a leopards coat. Clever. Surprisingly the broth wasn’t the sticky pork bone broth I was expecting, more of a thick sesame milk. The toppings (tea pickled egg, bamboo shoots, garlic chips, spring onion) were great and the chunks (rather than slices) of chasu pork were meltingly soft. Finished off with a sprinkling of Parmesan cheese, which didn’t dissolve into the broth but softened and sank into a cheesy lump. This sounds like a bad thing, but it was a nice surprise at the bottom of the bowl!

We rounded off the meal with a Nanbanana, a miso fried banana with cinnamon ice-cream and crispy noodles. In my experience hot banana can be hit and miss. This was a resounding hit! The banana kept its texture in the warm butterscotchy sauce. 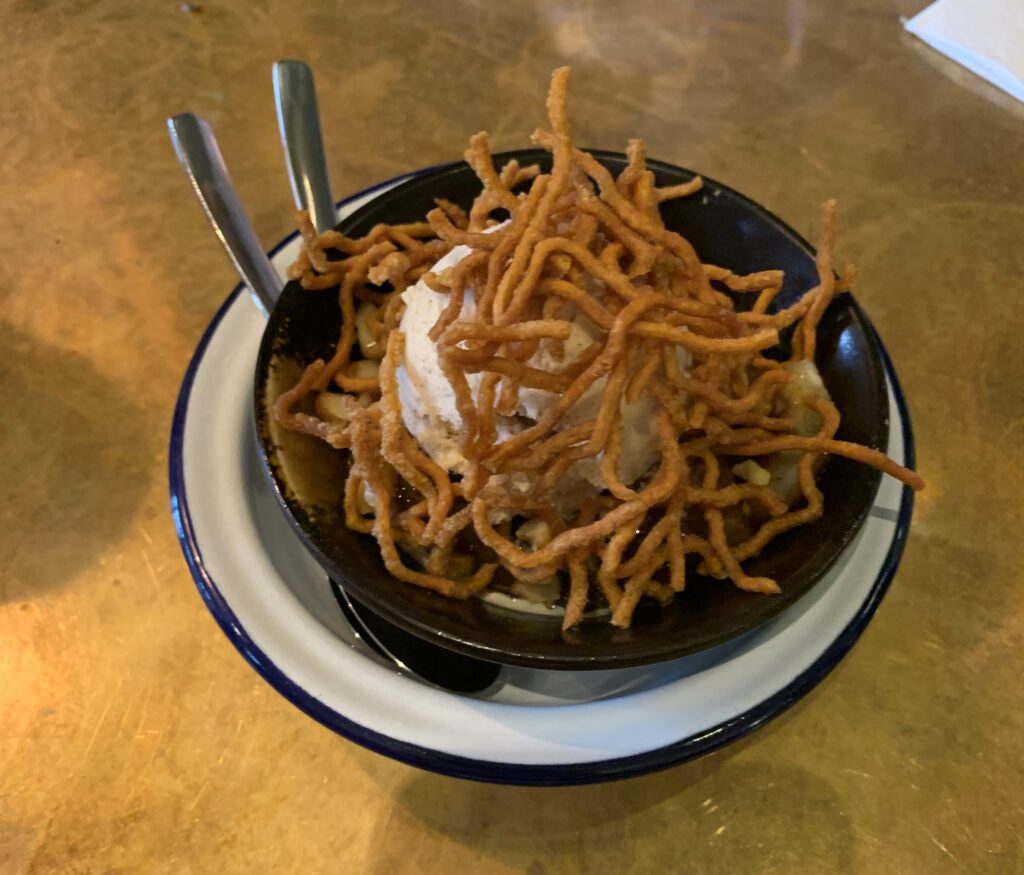 My first ramen after a very weird period was great, and Nanban remains high on my list of favourite ramen spots (even if it did turn out to be about 20% more expensive than Trap Kitchen…which we turned down because of prices! #fail)